The research on the history of the Archdiocese of Lviv in the Latin rite and the South-Eastern Borderlands of the Second Polish Republic has scarcely analysed the message of the pastoral letters of Lviv Archbishop Bolesław Twardowski (1923-1944). This little attention results probably from the fact that the letters were usually published in small editions, which made them dispersed and often barely available. Little popularity does not nullify their high quality and contents, as they show the whole spectrum of social and religious problems which characterised the local Church in the interwar period. Many descriptions and issues discussed within them are not only historical in their character but also timeless, universal, so they can be explicitly referred to modern times. This publication constitutes a first source edition of the pastoral letters of Archbishop Twardowski, which gathers them in one collection. In this way, it fills a clear gap in the bibliography, facilitate access to the hierarch’s heritage and opens the possibility for popularisation of this message. Furthermore, it contributes to better recognition of social and religious context in the Eastern Borderlands of the Second Polish Republic. The elaboration does not constitute only a reprint of original pre-war editions, as it is equipped with scientific apparatus and substantive introduction. The edited collection contains a total of 26 pastoral letters in their fullest versions along with attachments. 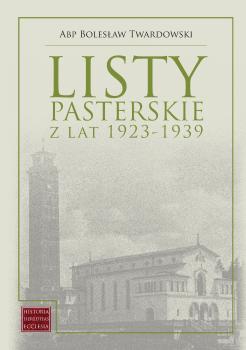