The book presents the life of Karol Wojtyła in the so-called Kraków period before he became a pope. The beginning caesura is the year 1938 – when a young man, after passing a matura exam in Wadowice, comes to Kraków in order to study Polish philology at the Jagiellonian University. The closing caesura is marked by the second conclave in 1978, during which a cardinal form Kraków became a pope and accepted the name of John Paul II.
The author describes the diverse vicissitudes of the Wojtyła’s fate, which were under the influence of experience of two totalitarian systems. He elaborates on Wojtyła’s personality, outlines character traits of this person. The author considers Wojtyła as one of the actors of underground theatre, a poet, dramatist, and writer of mystery plays. He presents Wojtyła’s philosophical achievements and affirmation of personalism, and shows commonness of Wojtyła’s life as a scholar. Separately, the relations created by this clergyman in a touristic Christian ministry and his attitude towards laymen have been considered. The largest part of the book concerns the basic social role of Wojtyła, i.e. his priesthood. The author presents how Catholic social science and the decisions of Vatican Council II inspired Wołtyła. The book also includes an interpretation of the clergyman’s approach to the priesthood of other people. The author links Wojtyła’s priestly practices to the context of communism, and elaborates on the forms of new evangelisation (advisory service for families, oases, Apostolic Groups, Sacrosong festivals, new post-conciliar liturgy, democratisation in structures of the Church subordinate to Wojtyła, Synod of Kraków Archdiocese). The last part of the publication includes considerations about Wojtyła’s attitude towards the dominant model of the then religiousness, i.e. “folk religiousness”. 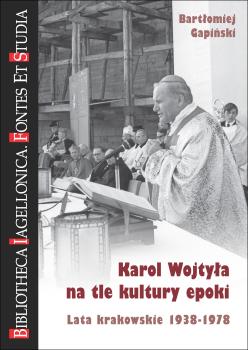