Roman Catholic Church in the 19th century, homiletics, Congregation of Sisters of Our Lady of Mercy, ultramontanism

Zygmunt Golian was born in Cracow on 9 July, 1824, the son of a surgeon. He was brought up mainly in Cracow, where he graduated from St Anne’s Gymnasium (Gimnazjum św. Anny) and from seminary, which was then run by the Congregation of the Mission and was located in Stradomska Street. He was ordained a priest on 26 December, 1849. Soon afterwards, along with his friend Fr. Wincenty Popiel (later Archbishop of Warsaw), he went on to study abroad, first to Louvain in Belgium, and then to Rome. He completed his studies as a Doctor of Divinity at La Sapienzia University of Rome in 1853. Already during his theological studies, Zygmunt Golian became famous for his great talent as a preacher, which he developed even further during his studies abroad. He was a master of the word, a polymath and an outstanding scholar, and an expert on the Holy Scriptures and the philosophy of St Thomas Aquinas. After his return to Cracow he became involved in the defence of the worldly reign of Pope Pius IX and the State of the Church, which had existed for over eleven hundred years as a guarantee of political and ideological independence of the Popes. The pressure from Italian nationalism and from the enemies of the Church with links to Freemasonry, the withdrawal of Napoleon III’s support for the Pope, due to the Franco-Prussian War, and the indifference of the majority of Roman Catholics, contributed to the failure to defend the Papal States. Fr. Golian was an undoubted patriot, but at the same time he was against the idea of using the Roman Catholic Church for realizing Poland’s aspirations to independence that was implemented in the Russian-ruled Kingdom of Poland after the defeat of Russia during the Crimean War. It was for that reason that he opposed patriotic demonstrations in churches and the involvement of clergymen in conspiracy activities, and, particularly, condemned the assassination methods used by the “Red” faction. This kind of attitude required a strong character, firm beliefs and courage, and was a consequence of his conviction that Christian principles are essential and binding at all times and in any situation, including armed combat, which is supposed to be fought openly, and not in a treacherous and traitorous way. He believed that the aim never justifies the means. 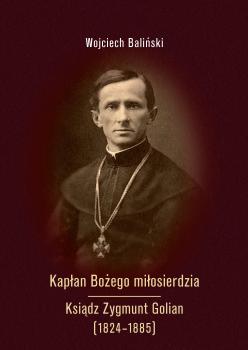