The main premise of this work is highlighting how old the human race actually is. Its origins, as the Author believes, are constantly shifting deeper into history, reaching now millions of years’ distance. Our position in relation to animals makes us unique beings, if only because it is solely us who can meditate on this subject. One should agree that evolution of our kind is a biological process, but talking about it is exclusively a product of our culture. The Author is aware that this book asks more questions than it answers. This is what it must be at the current level of our knowledge. The dynamic of archeological, paleontological and genetic discoveries is simply too great at this point in the 21st century. In reference to the possible criticism that the Author treats many of the findings presented in this book as hypotheses (and even working hypotheses), the Author must point out that in his opinion it is impossible to do otherwise.
We have been on this planet for a very long time, at least several million years. The concepts of separate species of Homo which appear in academic discourse are rather vague. The crossbreeding of different kinds of proto-humans points rather to the community of humanity of these creatures rather than to the unbridgeable gaps between them. This phenomenon has various biological and cultural consequences. One must be aware that such creations of the human spirit, perhaps supported by natural abilities, such as morality and, consequently, ethics and the foundations of the law, are very old. They are as old as we are. This is the fact that the Author wants to highlight in this book. Spirituality (symbolic culture), and in general - culture forming social structures specific for humans, even if not originating in our minds and being only a manifestation of biological evolution (although it has not been convincingly explained how this happens solely on the biological path), must still be stored in our minds. Most likely, they are or at some point become emergent entities in relation to the underlying factors. They form a new human quality. Culture, including legal culture, must have human mental space appropriate for its impact. It is within this culture that validation decisions are made with respect to the origin of legal norms as such (the origin of natural law) and the legitimacy of its application in a given case (the impact of primitive law). This publication makes an attempt to present the research area which appears under the influence of the achievements of the Stone Age archeology, exploring the beginnings of our kind.
The ambitious goal of this work is showing the stage on which these phenomena, extremely important for our existence, were able to occur both in time, in physical space, as well as in the mental space of our ancestors. This attempt is an archaeologist’s look at pra-culture with an emphasis on the moment when law may appear as a product of the human condition, which may be as old as the condition itself. It is widely known that the older something is, the more attractive it is to archaeologists. The work includes numerous references to research on contemporary primates, which in the face of rapid changes of the world are under threat in their forest habitats. We must protect them! We are responsible for animals, as well as for the whole nature. What is more, taking care of nature, we also take care of ourselves. Protecting the environment is one of our most important tasks at present. Understanding our responsibility for the world and actively participating in its protection, in the Author’s opinion, makes much more sense than trying to equate people with animals. 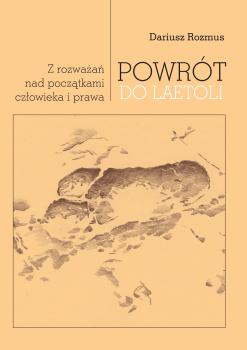